My resent vacation had me traveling through Los Angeles and we had just enough time to visit The Last Bookstore. It is a great bookstore with used and new copies of almost any book on any topic. The main floor has a comic book, children’s, teen, classic, history, and vinyl section. I loved the bank vault door leading to the room of rare books.

I loved the art piece at the top of the stairs, a bookcase surrounded by flying books. I believe it gave off a very Harry Potter essence. There is an art gallery, yarn shop and more books upstairs. Wish I had more time to search though the dollar books in The Labyrinth but there were just too many. I was able to walk through the book covered bridge into the horror room. There was a photo-shoot taking place and a really nice group a people allowing customers to shop while they worked. I didn’t realized until I was looking through the science fiction/fantasy section that I missed taking a picture at the porthole made of books since the shoot was using it. Guess I’l have to return one day and fix that error especially since there are so many books and little time to really explore the changing collection.

When it was time to leave I bought a few books. I loved the counter was made of stacked books. I took a picture of my book stash and I can’t wait to start reading them. 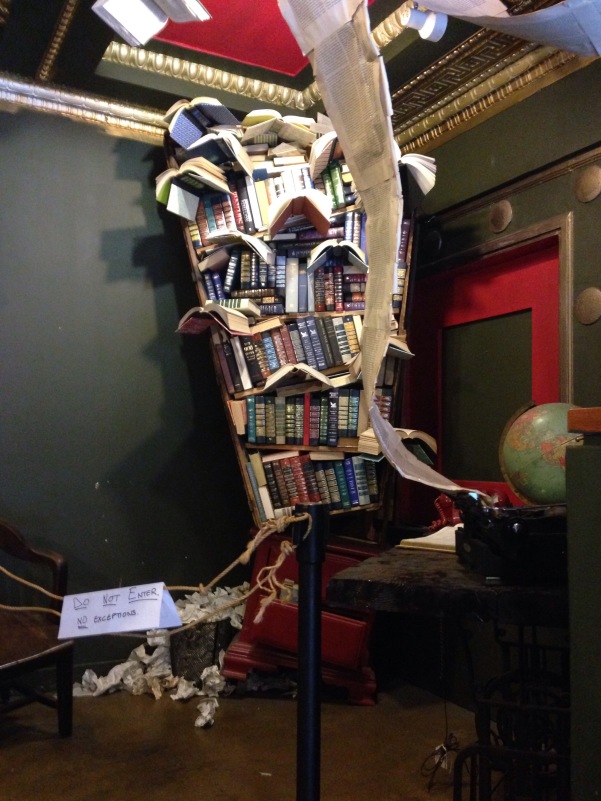 Like Loading...
I have seen friends met with negative comments because they have tattoos. Tattoos are for pirates, prisoners, sailers, etc., right? People only get ink for attention, or peer pressure. While some of these stereotypes can be true for a few people, it is not the complete reason everyone who has skin art has gotten one.
I don’t have any tattoos so why should I bring up such a topic? I wrote an article for The Celebrity Cafe sometime ago about Megan Fox having her Marilyn Monroe tattoo removed from her arm. The comments that followed below the piece had nothing to do with the article but people’s opinions about tattooed people. This article is old  and I worked on this blog post along time because I didn’t know if people would except a non-tattooed person writing about skin art.
In the comment section it was mentioned that tattoos are a self-esteem issue and someone’s need to be noticed. However, over time tattoo culture has had a much more in-depth history. Different cultures, communities, and times skin art has been used for healing purposes, rites of passage, marks of status and rank. Some marks are symbols of religious and spiritual devotion, and decorations for bravery. There are even tattoos used for sexual lures and marks of fertility, pledges of love, punishment, and protection. The leased liked marks may be that of outcasts, slaves and convicts. The ones with these marks may find their permanent label empowering. Numerous people use skin art to honor a dead relative or as a reminder of conquered tough times. This is where I think others should think twice before they push their judgement.
A few will use tattooing as an “in” thing but don’t demean the people that have tattoos that hold deep meanings of self-expression. Not everyone who has tattoos should be lumped in with Megan Fox. Not everyone that has tattoos have low self-esteem. Not everyone that has tattoos get them to be notice. Most people I know seem to have a tattoo or ten. And judgement goes both ways. Something I have seen some (not all!) tattooed people looking down on people without tattoos. I have been shunned or had a look of attitude or annoyance come my way when I reveal I don’t have any tattoos. I started keeping quite on flesh art because I was tired of defending why I like tattoos on others but why I don’t have/want any.
I had friends try to help me find something I can ink on to my body but after sometime they gave up and I realize that I don’t have to have or own something to say I like it.I guess I can say I look pretty plan to a tattooed person. The only marks on me are freckle, beauty marks, and the occasional bruise or childhood scar. I have been met with prejudice by friends when I find a man attractive who is tattooed and pierced. A “good” or “plain” girl like me shouldn’t step out of her stereotypical group. I have even shocked a friend or two and was told I couldn’t date someone that was excessively tattooed because I didn’t fit in with that attractive man’s image. I could have argued, “How do you know what any stranger finds attractive?” but we all have perspectives we place on people whether they are tattoo, pierced, or bear. In the end, I think (and I’m no one), who are we to make broad assessments and  judge someone.

Writer/ Aspiring Author/ Reader/ Gamer/ Book Slave. Blogging my writing, writing struggles, book reviews, travel, favorite quotes, and random creative prose. The views and opinions expressed on this website are purely my own. Some of the links in this website are affiliate links. This means if you click on the link and purchase the item, the owner of this website will receive an affiliate commission. Regardless, I only recommend products or services that will add value to my readers.